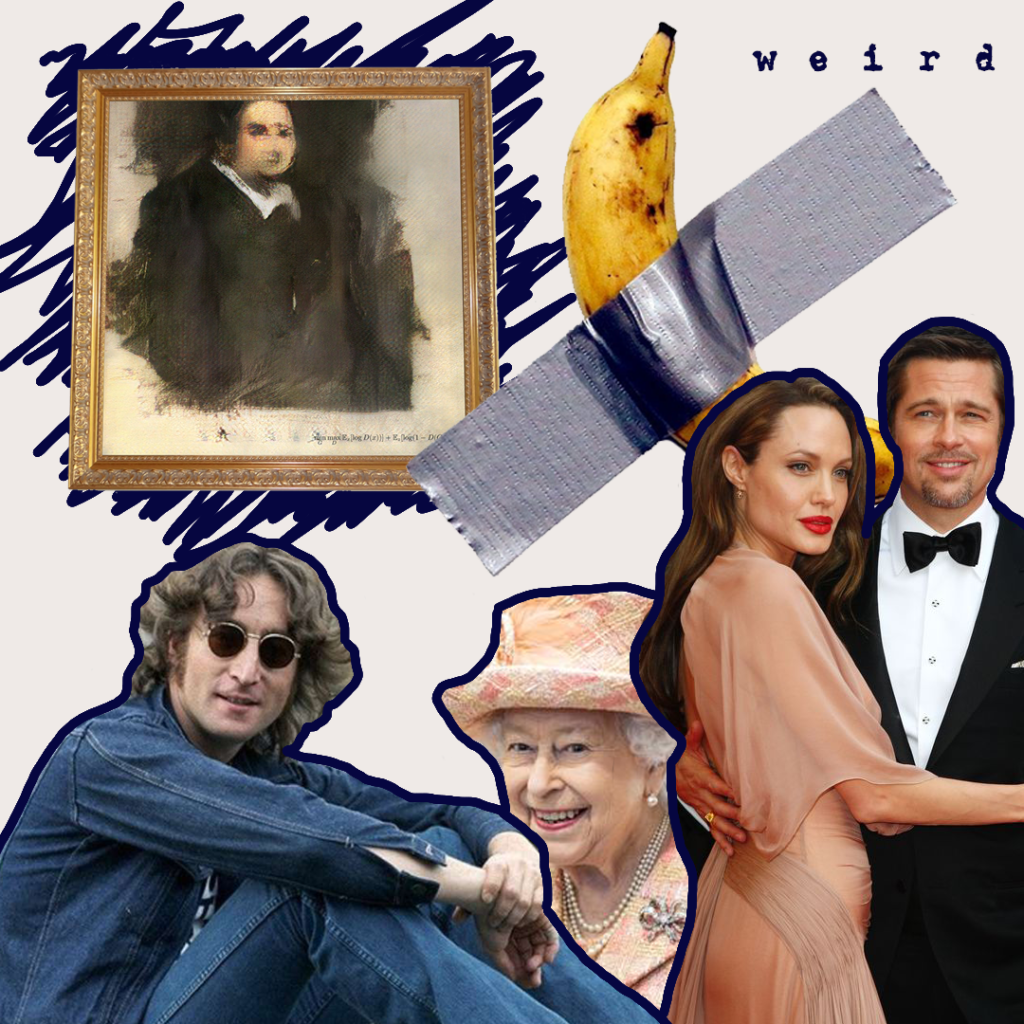 Here at Global Auctioneers, we tend to only sell items that are typically useful to people. Like a bed, chest of drawers, a baby car seat and so on.

But this week, we have stepped out of the ordinary and into the extraordinary. Having scoured the internet and poured over hundreds of sources, we have compiled a list of the most weird and useless items ever sold at auction. It really makes us think, some people have WAY too much money! So take a seat and prepare to be amazed!

Yep, you read that right…65 years on, in 2013, a slice of Queen Elizabeth II’s wedding cake was auctioned off for a whopping £560! For something you can’t even eat, it seems like an extortionate price. How do you even store and display this?

Again, we are left scratching our heads. Firstly, how do you capture someone’s breath? Well, someone managed to do it and even sell the jar for £340 in 2010. We wonder where it is now…

It is a wonder the human race still exists… By this point we have lost all hope! The 2000s singer and actor’s leftover French toast was auctioned off on eBay for a whopping $1,025 in 2000. How you would ever know the authenticity of the star’s French Toast, we have no clue. At least here at Global Auctioneers, we supply authenticity certificates!

A Banana Taped To A Wall

Art these days is open to interpretation, with almost anything falling under the category of ‘modern art’. It is not a surprise, therefore, that the esteemed piece, Banana Taped To A Wall, sold at auction for an incredible $120,000. We wonder whether the instillation lost its value once transferred to its new owner?

The Self Destructing Banksy

This one stands out from the rest of the weird items. The Girl with the Heart Shaped Balloon was sold at auction for $1.4 million, within a beautiful gold frame. Once sold, however, the piece slid through a shredder that had been installed within the frame. Oh how annoyed you would be after spending such a massive amount of money! We can only image people’s reaction!

Founder, co-lead vocalist, record producer and rhythm guitarist of the Beatles and peace activist, John Lennon has left an incredible legacy in his music and memory. It does not surprise us, therefore, that the multi-talented man’s toilet was nabbed and sold for $15,000 at auction. What an odd piece of memorabilia…

This one is pretty self explanatory. Elvis. Dirty. Underwear. What more could you want? Strangely enough, the pop star’s stained undies failed to attract a buyer and they still remain unsold. Maybe our faith in humanity has been restored?

This one, we think, is pretty cool. The man who won the war against the Nazi’s and made the infamous Iron Curtain Speech’s dentures were sold at auction for £15,200. Those teeth, quite literally, helped shape history. If we had a spare £15,200 we probably would have nabbed them ourselves! What a strange momento!

Sold for $432,500, the AI produced artwork is unfortunately a bit too creepy for our liking. Offering us a frighting glimpse of what’s to come, the artwork looks a lot like a shadow of a man. Possibly representing the Uncanny Valley theory in which the closer AI gets to us, the more unsettling it becomes. This artwork most certainly seems weird to us!

So, here were 9 of some of the weirdest and most useless items ever sold at auction. We think it is safe to say that not only do people have far too much money, but they also have way too much time on their hands! Here at Global Auctioneers, we only sell items that we think will help you in your daily life. Whether that is achieving your ideal home, sorting out Christmas lists or helping you out with a business! We hope you enjoyed the read and very much look forward to seeing you soon!