An Establishment Through Time: The Auction House - Global Auctioneers 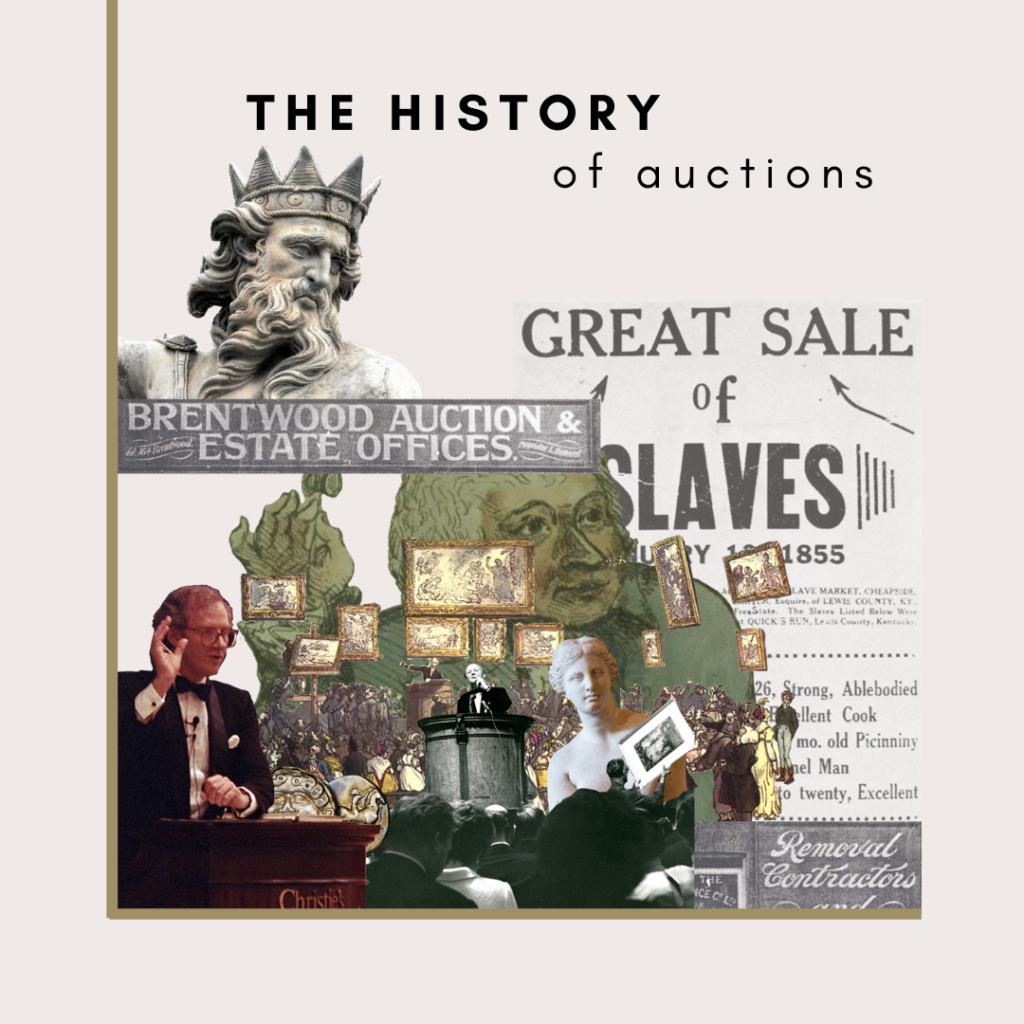 But auctions have lasted almost as long as democracy itself. With initial records dating back to Ancient Greece in 500 BC, some of the most common items bought at auctions included women and spoils of war. Evidence for this comes from Herodotus. He said in Babylon, women were auctioned off for marriage. The law actually prevented women being sold outside of auctions!

By 2020 standards, this is quite shocking to hear. This is only made worse when you consider the term ‘spoils of war’. Including inhabitants from annexed lands, newfound slaves were auctioned off. The proceeds of which went towards funding future war efforts.

In fact, the word auction comes from the Latin, auctum which means ‘increase’.

The auction itself disappeared from records between the fall of the Roman Empire until the Renaissance and the 17th Century brought a rise in popularity for auctions. With the new scientific discoveries and revolutionary ways of thinking, the Renaissance saw an overhaul in the way auctions were conducted.

Known as ‘Candle Auctions’, one candle was lit at the start. Once the candle went out, the auction was over. These Candle Auctions increased massively in popularity and gave way to the birth of the Stockholm auction house (Stockholms Auktionsverk) in 1672, which was reborn by the fruit grower Jangerling, who auctioned his produce off because of the high demand. This was closely followed by Sotheby’s in 1744 and Christies in 1766.

Intricate catalogues made an appearance by the end of the 18th Century. Available items included stock such as Tobacco in Europe as abolitionism became increasingly popularised. Tobacco was becoming more expensive as labour costs had to be factored in. The auction offered an alternative way of gaining this commodity. Across the pond, however, slaves were still traded and auctioned off to fuel the sugar, cotton and tobacco industry. 1859 saw the largest Slave Auction where 436 men, women and children were auctioned off. After the American Civil War, the goods seized were also auctioned off and some auctioneers also held the title of Colonel; a title still held by some American auctioneers.

Although the auction has its roots in classical antiquity, the nature and items invariably differ from today’s auctions.

Not only has the internet revolutionised the auction, but the increase and dominance of consumer goods has moulded the auction into an increasingly consumer-focused game. As of this year, eBay has 182 million active users worldwide, as the online auction room has taken the spotlight. Other such platforms, including iBidder are extremely efficient and handy for both the auction house and consumer. These online sites mean auctions can be held at any place and time. What is even better, is the fact you can participate in an auction and feel the thrill from the comfort of your own home; perfect for the current climate.

When comparing the nature of the auction 2000 years ago and today, it seems alien to us to even dream of auctioning humans, or spoils of war. Conversely, the idea of bidding on soft furnishings and clothing may be a completely odd concept to Ancient Greeks and Romans!